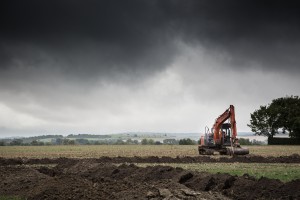 Ancient Blewburton Hill behind a JCB on the Green Gap

So Grainger is on The Green Gap digging it up. But thankfully they’re not getting in a spot of practice in advance of dumping 170 dwellings here.

They are digging because SODC told them to dig. In their pre-application submission Grainger attempted to have SODC believe that The Green Gap, which is the shadow of Blewburton Hill an iron age fort dating back to 4th century BC, was of no archaeological significance.

SODC told them otherwise. SODC told them their cheap, cursory and inaccurate desk research was insufficient. So Grainger is digging, presumably attempting not to find anything of significance.

Our understanding is that this work, like the (absurd) ecological study, is being paid for by Grainger. And we all know who pays the piper, calls the tune.