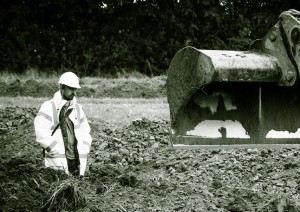 The third dimension of development sustainability is environmental.

Here’s the single paragraph that Grainger dedicate to the matter.“The environmental credentials of the proposal are not diluted simply because the site is currently greenfield. It has already been acknowledged by the District Council that it will need to develop greenfield sites to meet the objectively assessed housing needs during the Plan Period. It is not therefore a question of choosing between PDL sites and greenfield sites, as there are too few of the former to avoid the release and development of the latter.”

Yes, you read it correctly. They said: “the environmental credentials of the proposals are not diluted simply because the site is currently greenfield.” Two points: firstly, er, sorry but yes they are diluted; secondly, no they are not simply diluted by this fact, they’re diluted by a whole bunch of other matters as well.

That is not the same thing as saying that no greenfield site or indeed Green Belt should ever be built on. But it is saying that Grainger’s argument that as greenfield sites will inevitably have to be built on, it might as well be the one belonging to the Applicant is not an argument that is ever going to prove conclusively that the benefit of this will outweigh the harm.

Grainger makes no attempt to undertake any form of sequential test to even promote the notion that his site might be the “least worst” from an environmental point of view. This was, of course, precisely what SODC did when considering a number of expansion sites for development in the run up to the adoption of the Core Strategy in 2012.

Paragraph 112 of the NPPF tells us that: “Local planning authorities should take into account the economic and other benefits of the best and most versatile agricultural land. Where significant development of agricultural land is demonstrated to be necessary, local planning authorities should seek to use areas of poorer quality land in preference to that of a higher quality.” Unless and until this exercise has been completed we can see no valid environmental credentials for the site.

Again the Applicant fails to bring forward the true intent of the environmental role as defined by the NPPF. For completeness, the NPPF states at paragraph 7 that the environmental role is about “contributing to protecting and enhancing our natural, built and historic environment; and, as part of this, helping to improve biodiversity, use natural resources prudently, minimise waste and pollution, and mitigate and adapt to climate change including moving to a low carbon economy.” The Applicant fails at each and every point.

The planning and development history of this site has a golden environmental thread running throughout and across its planning history. The Green Gap has an historic and continuing key environmental role in demarking the end of the urban and the beginning of the rural. It is an open civic amenity space with clear views of the adjacent Areas of Outstanding Natural Beauty.

The Green Gap plays a vital role in “protecting and enhancing our natural, built and historic environments” by preventing coalescence between the urban environments of the town of Didcot and the village of East Hagbourne.

In fact during the Core Strategy 2012 process, this historic and continuing role of site was confirmed when SODC earmarked it as “new accessible green space”. In their recommend to refuse, Didcot Town Council reminds us that the Core Strategy 2012 relies on a report into Green infrastructure prepared by Chris Blandford Associated. Here is what Blandford says about Grainger’s site: “This option provides significant opportunities for strengthening the local landscape character relative to some other options, and offers some opportunities for nature conservation enhancements. It would contribute to the priority for provision of accessible natural greenspace on the doorstep of and close to residents within Didcot.” This underlines why this site is valued and treasured by residents of Fleet Meadow, Northborne as well as East Hagbourne.

So the question for SODC to answer now is where in urban sprawl that this Application envisages for Didcot will the green space be now?

The Applicant might argue that the provision of bird and bat boxes is adequate mitigation for the loss of historic open fields. However, we agree with the Inspector at Shiplake who concluded at paragraph 85 that in the context of actions such as these: “it unlikely that the benefits to biodiversity would be significant and so I give this matter limited weight.”

The Applicant’s proposals also do nothing to assist the move to a “low carbon economy”. The proposal will introduce a development of 170 dwellings at a location deemed only moderately sustainable from a transport perspective. A corollary will be the fact that food production will cease at the site deemed best and more versatile for food production, placing yet more strain on the region’s food production security and sustainability.

The Government’s Code for Sustainable Homes may have gone, but the spirit lives on. The Applicant proposes: “implementing all viable energy efficiency and carbon reduction aspects throughout the development. The energy demands of the new buildings and carbon dioxide emissions generated will be reduced primarily by focusing on passive enhancements such as solar gains, daylighting, air tightness and improvements to the fabric”. However the definition of “viability” is left open to interpretation, presumably the Applicant’s.

Further, this “passive” approach creates significant doubt that the Applicant will be able to meet paragraph 95 of the NPPF – “the Government zero carbon buildings policy.” Certainly, the Applicant provides insufficient information from this to be determined positively in his favour.

So Grainger’s “environmental credentials” are simply not established but everywhere diluted. The only reasonable conclusion therefore that the environmental hard of the scheme significantly and demonstrably outweighs any benefits.