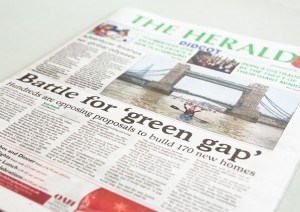 Your campaign is front page news again today. With such strength of feeling in the community this is no surprise.

Grainger’s Mr Beresford tells us in the article that he will discuss the outcome of the consultation process with SODC. This discussion may take a while as at time of writing over 340 comments have been made.

Three are in favour. There’s a handful of official responses. The rest roundly slate Grainger’s speculative plan and articulately set out how approval of it would contradict the council’s policies and the government’s planning guidance.

Mr Beresford says that after his chat with SODC he will “take it from there”. We suggest you take it back to Newcastle Mr Grainger and leave our community alone.

There is still time to add to the chorus. On the OBJECT page you’ll find a link to SODC’s site and advice on how to have your say.