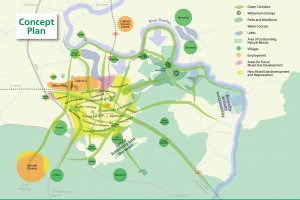 So we have found out more about the Greater Didcot Garden Town concept.

Firstly, the overall concept looks to be a good one. It absolutely recognises that there is a huge difference between housing estates and thriving communities. It seeks to recognise and calibrate spaces for housing, jobs, infrastructure, leisure, retail and open green areas. In other words it promises proper planning.

Secondly, it is a concept not the final article. SODC, Vale and OCC put together a ‘concept’ in order to secure central Government support.

The 15,000 houses that come with the concept are all accounted for in existing Plans produced by SODC and the Vale. Of course that is a lot of new housing that will arrive over a period of time up to 2027. The key thing is that we don’t need to find new places for loads more houses.

A major consequence of this strategy therefore is that it rules out further major development in Didcot and in particular to the South of Didcot. Equally there should be also be no need or support for speculative housing schemes.

The concept plan developed by SODC clearly retains some elements of the ‘green necklace’ – such as the Green Gap – but clearly indicates a big step forward. Lots of it – apart from the Green Gap – is clearly up for grabs.

John Cotton, leader of SODC, has cautioned that none of this will happen over night. Part of SODC’s pitch was for funding to get to work on the concept. A key part of process we are told will be community involvement. Once there is a formal master plan, SODC will be in a position to go back to government with specific funding proposals so that the Garden Town becomes a reality.