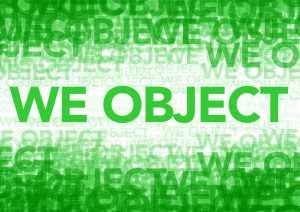 Grainger has submitted revised drawings for the road layout of its scheme. It has also submitted a ‘Supplementary Road Safety Audit’.

SODC did not feel it necessary to consult with the community about these amendments. This is despite serious and well founded concerns about road safety.

They did however ask the Campaign, East Hagbourne Parish Council and Didcot Town Council for their views. Not surprisingly both Councils have reaffirmed their objections. And so have we.

You can read our letter of objection here.

While SODC have not asked the community for its views there’s nothing to stop you letting them know what you think. SODC’s consultation website is here.

Didcot Town Council had previously objected to the development as it closed the gap separating Didcot and the village of East Hagbourne. Now, after reviewing the latest set of plans they have confirmed their existing objection and added a further objection based on serious road safety concerns.

END_OF_DOCUMENT_TOKEN_TO_BE_REPLACED

We’ve heard a lot of about the hundreds of objections that Grainger’s application has attracted. We’ve not heard much about the 1 or 2 who are in support. Largely, because they are just that – literally one or two.

In the last the couple of days a new statement from a local resident that could be seen to be in support of the proposal has appeared on SODC’s application web site.

However, even this support is caveated with provisos. The purpose of this response is not to fall out with the local resident – everyone is entitled to his or her views – but actually to suggest that we share many of their concerns. We happen to feel, passionately, that Grainger’s scheme does not provide a sustainable and viable solution to them. END_OF_DOCUMENT_TOKEN_TO_BE_REPLACED 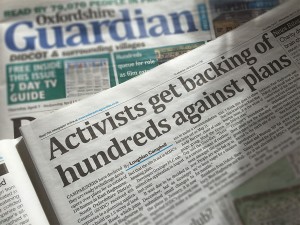 The Green Gap is in the news again. This week’s Oxfordshire Guardian features an article about the hundreds of Town and Village residents that have objected to Grainger’s speculative plans. Well done everybody. It’s good to heard.

It’s little wonder that the press remain interested. This is much more than a local issue. It’s about SODC’s credibility.

SODC has made repeated assurances to protect the district from speculative development. It’s unveiled a Garden Town concept that promises a green and pleasant Didcot. And both its own and OCC’s experts have raised serious concerns about Grainger’s plans.

Yet we still have no clear commitment from SODC that it will join us in our fight to save the Green Gap.

We will be writing to our council Officers and senior Members. We’ll remind them how Grainger’s plan is both unsound and unwelcome. We’ll remind them too that only a planning refusal and clear commitment to fight Grainger will leave their credibility intact.