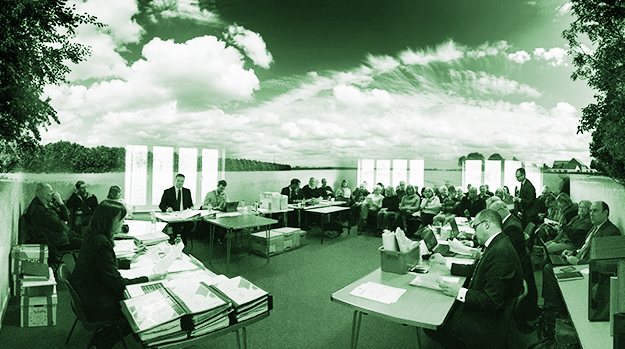 Today was the last day of the Green Gap Appeal Hearing.

Proceedings began with a bewildering presentation by Grainger’s representatives about ‘conditions’ that would be applied in the event that the scheme goes ahead. There’s nothing substantive to report other than the Council, OCC and Grainger have reached an agreement.

The rest of the afternoon was taken up with three lengthy closing statements by each of the three barristers. There were no major surprises or killer blows. Tom Cosgrove QC for the council cited loss of a valued landscape and coalescence – in the context of an emerging Garden Town – as reason for refusal. Mind the Green Gap’s Hashi Mohamed memorably paraphrased Grainger’s position on the (non) existence of the Gap as “I see no ships”. He went on to concur with SODC’s core argument and added the added element of loss of ‘Best and Most Versatile’ land to the pot. James Maurici QC for Grainger repeated their well worn case. There is no gap. There is negligible harm. There is a housing need that they will fulfil.

Tomorrow (Tuesday 24th) the Inspector will visit the site. She’ll be chaperoned by two representatives from each of the parties. The tour will start at 10am at Fleet Meadow Community Hall, then walk south to the Gap. After enjoying the view (which presumably Grainger’s team will not see) the group will walk east down the Public Right of Way on the north of the site, then turn South over the open field to reach Great Mead. From here they will loop around the Village centre before walking up New Road to the Gap.

After that we wait. The Inspector has been armed with strong reasons for refusal. If she minded to side with the campaign and the community she can do so with confidence that any legal challenge by Grainger would fail.

The Inspector will take at least two months to reach her decision. Let’s hope sanity reigns. Let’s hope she makes the only right decision – to Save the Green Gap.